Updates to Patricia's profile since your last visit are highlighted in yellow. 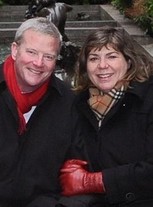 I moved to California and finished High School at JFK High School with a graduating class of 1000. It was so big compared to PHS, I always wished that we could have stayed and graduated with the rest of you.

When I first came to California, I stayed with the Hoffman family. Some of the South Jr. High folks might remember the twins Bobby and Tommy Hoffman. They also had an older sister Patty (class of '76). I can't remember which twin went to UC Santa Barabara (#1 party school on the west coast) but they both became surfers....

I decided to stay in California for college to be close to my family but they moved to London England after dropping me off at UC San Diego. I transferred to UCLA (best decision of my life) and graduated in 1981 with a degree in Psychology. I married in 1983, worked for International Recitifier for 9 years, had two wonderful children, worked for Sun Microsytems for 20 years. I retired in 2010 after Sun got bought out by Oracle.

We travel to Lake George New York every summer and have visited Pittsfield many times.

I remember Math Class with Miss Murphy and getting detention from her after she found out my brother Charlie had named our dog after her.

I remember having Mr Coffee (the ex priest married to Mrs Coffee the ex nun) for English. One day we had a film strip, the kind where you turned when the beep was heard on the record playing along side the film projector. Mr Coffee had put the wrong side of the record so there were no beeps to trigger the next slide. We told him, "you need to turn it over" meaning the record, but instead he picked up the entire record player and moved it 90 degrees and not flipping over the record. We watch the entire film strip on the same slide, no one else said a word.

I remember Junior year having to be bundled up in the winter and walking around the muggy, warm boys club pool on the way to gym class.

I left PHS in May of my Junior year for a new larger high school in Los Angeles. I remember wearing that PHS gym uniform to my new high school at JFK High (big mistake). It was a coed (!!) gym class, no uniforms required and I got smashed in the face with a volleyball.

Comment
How many siblings in your family?  What are their names and ages?

What Elementary School did you attend?

Where else have you lived?

Comment
Do you still see/talk to/or hang out with any former classmates? If so, who?

Facebook friends with Sally Hourihan, Kit Connelly, Cindy Coury and others. Love keeping track of all my PHS friends via Facebook.

Comment
What did you always want to do that you haven't done yet?

Comment
What did you want to do or think you were going to do when you finished high school?

I always thought that I would go to school in New England. I got in to Smith College and Chatham College (another girls school and now part of Carnegie Mellon) but decided to go to UCLA instead.

Comment
What are some of the high points of your life since high school?

Living in Europe during college.
Marrying the love of my life.
Launching great, smart and caring kids/adults
Going to work everyday at a job I loved.
Retirement.......

Comment
Do you have any Grand kids? How many?

What do you like to do in your spare time?

UCLA Bruins (the other bruins)

What's the farthest you've been from home?

Comment
What would we be surprised to know about you?

When I was 17, I never thought I would spend so much time watching magic shows (my husband is an amateur magician and member of the Magic Castle) baseball (my son played in high school and in College) and volleyball (my 6' daughter played in the Junior Olympics in Miami Fl.)

Comment
What song(s) transports you back to high school?

Hockey Games
Dances at the basement of the Boys Club.
Wearing painter pants.
Drivers ed with the only teacher in town. Can't remember his name but crashed his airplane.

Leaving before my senior year.